Home  / Tales from the Wild
Previous  / Next Tucked away in the Basque Country of northern Spain, San Sebastian almost seems too good to be true. The charming old town full of Belle Époche architecture sits perfectly amongst the dramatic coastline with jaw dropping views. The result is a town of unparalleled beauty, with three beaches set in defined bays, each with it's own personality.

After a day of surfing the world class beach breaks, or simply people watching from your place in the sand, you must take a stroll through the medieval old town and sample the internationally renowned food culture. San Sebastian has the highest concentration of Michelin star restaurants anywhere in the world, and this is a town that takes it's food seriously.

However, to only eat in fine dining restaurants would be to miss perhaps the best thing about San Sebastian. While Spain is famous for it's tapas, San Sebastian has it's own take on the Spanish icon. They're called Pintxos, and they are an experience that mustn't be missed.

Each bar offers a buffet of snack sized offerings that make the mouth water. Priced between 1 and 5 euros, they won't break the bank either. Instead, you can crawl from bar to bar to sample their most famous offerings - and don't forget to wash it all down with a glass or two of the local Txakoli wine.

May to July offers the warmest temperatures and lowest amount of rainfall, although it's also peak tourism season and accommodation can be expensive. Try October for the best of both worlds. With a little luck you will still have excellent weather without the overwhelming crowds of the peak season. If San Sebastian is great because of it's culture and civilisation, Port Barton is great for completely opposite reasons. Situated on the island of Palawan in the Philippines, Port Barton is usually the third choice on a two town island.

Compared to it's more famous sisters of Coron and El Nido, Port Barton can be a hassle to get to and lacks many of the tourism focused amenities that are common elsewhere. Instead, you trade high speed wifi and high class restaurants for peace, quiet and relaxation. With a beautiful sandy beach and it's own set of beautiful islands to explore, Port Barton offers a wealth of natural beauty to be explored and enjoyed.

The town runs on generator power, which cuts off at 2am each night. But this is the kind of place where you're most likely sleeping in a thatched roof hut on the beach, or a treehouse suspended in a palm tree, so you won't much mind. Instead, you can let the waves lull you to sleep and enjoy the kind of break from the rat race that is getting harder and harder to find.

January to March offers the best weather, with sunshine and blue sky the normal routine. Let me get this off my chest right away - I hated Labuan Bajo. A dusty heat trap with no beach, no great restaurants and a dirty port, Labuan Bajo is not your typical idea of tropical paradise. The reason it's on this list however, is not for the town itself. Rather, it's the fact that it's the jumping off point for one of the most beautiful places on the planet - Komodo National Park.

This is a land of dragons... Komodo dragons. And it certainly looks the part, with mountainous islands fringed with sandy beaches and coral reefs. The best way to experience the park is by booking a multi-day boat trip from Labuan Bajo, which gives you the opportunity to see some of the more isolated spots.

If you're a SCUBA diver then I can't recommend a week long liveaboard trip enough. Komodo is home to some of the most spectacular diving in the world, with countless reefs and bombies to explore. Manta rays, reef sharks and whale sharks are all commonly sighted, and the wild currents make for some adrenaline pumping dives.

Of course, a trip to this part of the world is not complete without paying a visit to the dragons themselves, which inhabit two of the islands in the archipelago - Komodo and Rinca. On a guided tour with park rangers, you are able to see these modern day dinosaurs in their natural habitat, which is not something you soon forget.

April to June is peak season in Indonesia, with the best weather and the best opportunity to see the dragons. Try August to October if you want to beat the crowds. The weather might be a little hotter, but prices will drop as tourists numbers dwindle. Sri Lanka isn't usually the first place you think of when you hear the words "surf Mecca", but this little town in the south of the island is starting to make a pretty big name for itself. With golden beaches and world class reef breaks, Unawatuna is finding itself riding the crest of Sri Lanka's recent tourism boom.

This little town has a great selection of beach front accommodation and restaurants, without losing it's laid back and alternative flair. This is the kind of place where you wouldn't mind staying a little while longer, once you get into the rhythm.

The nearby town of Galle is a UNESCO world heritage sight and offers a buffet of fascinating experiences. With it's historic dutch architecture, Galle has a charming atmosphere and is a great place to stroll away an afternoon or two.

December to February offers the best weather, though prices also tend to increase. The monsoon months of April to September are cheaper, but be prepared for lots of rain if you're unlucky. No list of beaches would be complete without at least one entry from Australia. With 10,685 individual stretches of sand, beach-going is more than just a pastime - it's a way of life. After all, this is where our Evolve adventure towel was born and bred!

Situated on the mid-north coast of New South Wales, Crescent Head is far enough away from everywhere that it's managed to hold on to its sleepy village atmosphere, despite its abundance of natural gifts. Most famous for it's peeling surf break, Crescent Head is the quintessential Aussie coastal town. It's culinary highlights begin and end at the local bakery ( the meat pies and sausage rolls are excellent), but what it lacks in sophistication it makes up for with down to earth charm.

The town is surrounded by national park, where you can spend the night camping under the spectacular Milky Way. In the morning, you might even be lucky enough to find Kangaroos on the beach or dolphins in the surf as you watch the sunrise.

December to February is the peak of Summer, but also the busiest time. To have the place to yourself, I suggest visiting in April or May instead. 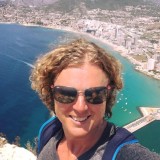 CEO and Founder of Evolve Travel Goods, Wayne is an environmental science teacher, lover of the outdoors, and a travel addict. He grew up in sunny Sydney, spending most of his free time exploring the Australian coastline for surf and camping spots. Now he lives and works overseas, teaching in international schools and using Evolve to show his students that sustainability and a thriving business can go hand in hand.

Also in Tales from the Wild

Our buttons are (literally) nuts